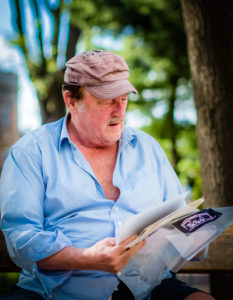 Wiesław Stefan Fiszbach is originally from Tomaszow Mazowiecki, Poland but he has been leaving in Berlin for 30 years now, where he has his Atelier and where he directs the Gallery NaKole.
He is the initiator of the project “My City” and organises a series of exhibitions (photography, drawing and painting) comprising of German and Polish artists.

The idea behind the project was the mutual approchement of showing the migration processes of the big cities and the emigration of the small towns and the multi-directionality of the consideration of cultural differences, also in the eyes of young artists.
As a member of the association of artists of European integraion, he exhibited his works in the gallery of SAIE in Szczecin. He took part as a member of the exhibitions, organized by the Association of Polish artists: title “Dwa Spojrzenia” meaning “Two Dimentional look”
, with the guest of honor Artist Andreas Noack, who was present in Lodz during the presentation that took place in the Gallery of “Na pietrze”, in Warsaw “Wolne Slovo” and during the exhibition at the City Library in Tomaszow Mazowiecki and in the castle Knothe.
In Berlin, the exhibition “Courage” was organised in the gallery of NaKole with the support of the Polish artists from the Warsaw Praga.

In the Kreuzberg gallery was the exhibition “Görlitzer Park”. He exhibited his works at Brandenburg in et al in Luckow, state and in Penkun in Strasburg (Mecklenburg-Vorpommern).
He started drawing and painting since he was 5 years old. The first steps he took was when he was a youth in the House of Culture in Tomaszow Mazowiecki. He was awarded for his work, and among others, an UNESCO price in London and Delhi.
Since 1974 he worked as a lecturer at the Warminsko-Mazurski University in Poland and from 1977-1981, he worked as a pasture breeding of bulls in Dywidy near Olsztyn and
In 1981 he founded a company that spezialises on interiors.

Since 2005, he brought together both his works and as well all his fellow Polish and German artists in the gallery NaKole. The gallery NaKole is located in the bohemian district of Berlin Kreuzberg, where he lives and where he can indulge in his Artistic vein.
Since then he has led to the reconstruction of the historic church building in Berlin, he enjoys great recognitions in this field.
Wieslaw Stefan Fischbach is extremely sensitive, creative, and always on the lookout of new innovation His empathy and the great experience of life swinging on the fascinating axis between art and sport have helped him to discovered his unusual occurrence of sensitivity to the situation of modernman.
The first dimension called the real dimension was first initiated around 140 billion light years from the big bang. The big Bang has both our begining and it`s location in the universe with the help of the Subconscious mind, on which the so called Bridge is determined. The natural connection with the Subconscious is achieved through Dreams. The balancing between Mental and Physical health, contributes to the dreams we dreamed. The imagination facilitates the penetration into the subconscious.
Imagination according to Einstein is more important than knowlege, which is in fact an infinite as the universe. The second dimension determines the man and his view of the world – the world and its surroundings as man perceives them. Schopenhauer explains the deimension in an equation like for example: WATCH + LISTEN = PRESENTATION. The act of viewing, is easier for the survival of the people in the first dimension and is cold, brutal and with weather disaster. Through the development of civilization (art and technology, irrespect of the problems such as wars) the second dimension is for Human always more friendly and bearable.
The third dimension consist of both the first and the second dimention. To an extent, man as an element of the universe, excerts it`s influence. This happens by the energy generated in the first real dimension through the artistic concentration which in turn is connected to the immigration of the Subconscious. With the help of science, the expenrience and knowlege from the first and second Dimension, Thanks to the ability of the concentration in a certain moment and on a certain object, we will be able to enter into other dimension.
This is possible with the help of a telescopes. This role takes over the IMAGINATION, INTUITION and the SUBCONSCIOUS which are connect as a constituent atom in the UNIVERSE.
The fourth dimension is concerned with the theory of COSMIC strings. It is a relatively new theory that i am dealing with intensively. The theory of COSMIC strings is the existence of NICHES that are based on the arising of the begining of the great explosion and its proportional.
In the confrontation with the reality of the external world, man has to be strong and fit – both mentally and physically. Body + Soul = Life. None of these two factors may exist alone. It’s not just useful to assign the art of the spirit and the physicality to only sport. Sport is art, and vice versa. As well as the same basic which includes values: imagination / courage, willpower and concentration.
According to the state of happines, Both sports and arts, have the desire of entelechy – desire for the state of perfection and fulfillment.

Stefan W. Fiszbach – the perspective of an artist in sport

You are cordially invited to an exhibition of paintings and graphics of the German-Polish artist Stefan Wieslaw Fiszbach at the COS (Center of Sport), in Spala.
The affirmation of sporting rivalry fits perfectly into the historical coexistence of sport and art. Since ancient times, these two areas were integrated into the Olympic Games. The connection between the spiritual and the physical activity has its origins in the ancient Youth Education. This training was based on the idea of ​​the ideal man: strong and wise should he be. The competitions in the various fields of art are therefore regarded as equal but solid constituents of the Olympic Games.
There are several reasons why this art of exhibition will be held precisely at the site (Spala). The author Stefan W. Fiszbach is originally from Tomaszow Mazowiecki. He graduated from the general education lyceum LO I in Tomaszow Mazowiecki; where he in “Lechia” actively participated in volleyball sport team and won four championships in the junior and youth category. He also had a few appearances as a member of the youth national team. During his studies, he was associated with the volleyball team AZS Olsztyn, and later founded Judo section. In addition to his successes as a coach he won as a player a bronze medal in the Polish Championship of seniors.
The title of this sport is the Artist at heart. Thus it is not surprising, that we can often admire an athlete silhouette in his artworks. With a perfect shape inline, the artist presents the harmonic form of the athlete, the athletic muscles of an athlete and his movement. The pictorial vision of the artist shows not only the expressive and dramatic struggle but also victory in competitions. The Sport motive of Stefan W. Fiszbach is deliberately as a pretext, and sets the theme as a metaphor. It is the eternal struggle between good and evil, the struggle of man with his own weaknesses and his fate.
The artist that has been living in Berlin for 35 years belongs also to this struggle; with success he has fought for his wishes and has fulfilled his realization of his dreams.
“In the light of the reality, a man must be strong and stay mentally and physically fit. Body + psyche = life. None of these factors has the ability to exist alone. There is no point of art to assign the sport of the soul and that of the body. Sport is an art and vice versa, since they involve the same basic values: Fantasy / Courage, Strength, Will / concentration. They are connected to each other and cannot exist without each other. Man is an integral part of the universe. Both in art and in sport. We will aim for the state of perfection and fulfillment “- says the artist.
For about four years the artist’s interest is particularly focused on the social issues. With his sensitivity, he recipient problems and dangers that lurk on the youth of today. The Görlitzer Park, whose name bears the exhibition, lives and the works of art are being created there. The changes shown by the artist in different dimension serves as a warning and is of course not only to the younger generation of multicultural urban area – directed in Kreuzberg, Berlin.
Stefan W. Fiszbach – Art Exhibition “Görlitzer Park” – sports center COS OPO in Spala, Gallery Champion
Exhibition curator: Bożena Alicja Markiewicz